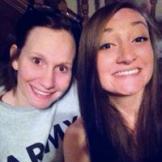 Fuck grammar.    I'm sorry but I just get annoyed by that Humanities-student-terrified-of-math cliche. I know you're probably joking but it's just annoying. Scientists/mathematicians/programmers can

What a nasty person you are.  I know how to add and subtract.  I just feel sorry for people who are so elitist, and unhappy, as you are.  Your attitude will find you nothing but money in life.  I hope

I wasn't referring to you. I was talking to the person who said "fuck math." I was referring to the Humanities people who could care less about their lack of ability in math and who almost find it fun