Things worse than getting rejected from your top choice program. 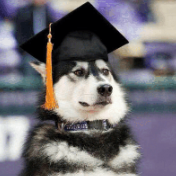 Getting rejected by your bottom choice program.

Waking up and realizing you're Justin Beiber?

Not applying at all.