By thebestartistintheworld,
August 11, 2016 in Visual

So, I interviewed at Yale for sculpture. They ask you to do a formal presentation of your work to the students and faculty. I was not flustered, I spoke from the heart and hip about my practice. 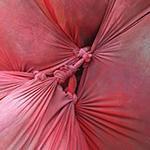 Congratulations to everyone so far! And to you guys who haven't gotten quite what you wanted; don't give up! I don't believe in the theory of No, rather I believe in No(t right now). So keep making th